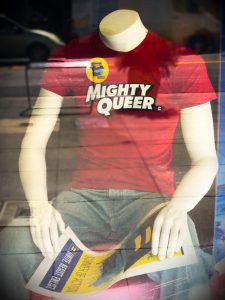 We received a polite question from a visitor asking why we used the term “queer” for the people we helped when historically that word has been used as a homophobic taunt.

We are not arbitrators of good taste or cultural terminology, but we’ve seen over the past years gay, lesbian, bisexual, transgender, questioning, intersex… sexual minority… people have worked to reclaim the word “queer”. Younger people first started using it to describe their community, and it is preferred — or at least accepted — by most LGBTQI people now.

The danger in listing LGBT, LGBTI, LGBTQ, or whatever specific set of initials you choose is that you will inadvertently leave out a letter that someone will say is who they are. Using a generic term like “queer” finesses the problem of leaving someone out.

It’s likely that there are some LGBTIQ people from an older generation (like me) who still feel uncomfortable about the word “queer” because it was used against them. However, I hope that the general wide acceptance and the context we use the term in will make the most people possible feel included and respected.

I snapped this photo of the clothing for sale in the Castro Human Right’s Campaign window. They’re a pretty conservative LGBT rights organization, and even they are selling t-shirts for proud queers! 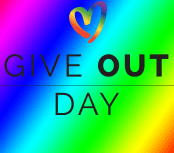 The Guardian Group is looking for financial help to continue its work of supporting San Francisco area LGBTI refugees, asylum seekers, and asylees. This year we are participating in the Horizon Foundation’s Give OUT Day on April 20th.

Here’s the link to click with your credit card in hard on April 20th!

Throughout the day-long event, thousands of people make gifts to support a vast array of LGBTQ nonprofits across the country, ranging from the arts to social services agencies, advocacy groups to sports leagues, community centers to health care nonprofits. The Refugee Guardian Group is one of the charities that are participating in this event.

Of course we will happily accept donations any time. But, if you’re considering helping the cause of queer newcomers, consider acting on your generous impulses on the 20th!

We really need your help to continue our work in the community.

Here’s the link to click with your credit card in hard on April 20th! 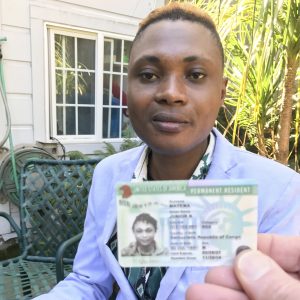 Junior’s wait to receive his official notification of permanent residency status was long — but apparently also normal.  He applied in November, 2015 and waited about 16 months. All the while there was no news from the government — the Green Card application process is completely opaque to the “customers”.  It’s very nerve wracking, especially since the November election.

Unless you’ve done something criminal, you shouldn’t have to worry about getting the Green Card. At least as far as I know or what our clients have experienced.

But, the process takes a lot longer than is reasonable, even by the government’s standards. People waiting for Green Cards are told to get one-year extensions of the employment authorizations. But, that time expires before the Green Card arrives. So, more applications, more fees, and more anxiety.

On the other hand, it’s a real celebration when the card arrives and is in your hand!

The Guardian Group Steering Committee recently adopted a set of policies for our work.

Since we started meeting in 2011, much of what we did and encountered were the new to us.  We didn’t have time to codify what we were doing, and it felt like everything was being experienced for the first time.

We tried to use common sense and relied on each other to come up with standards for each situation we ran into.  Fortunately, we didn’t have any blow-ups that resulted from our seat-of-our-pants work.  But, new volunteers were frustrated at the lack of any written guidelines, and we wanted people to have an easier time pitching in.

So, we have created a policy and procedures manual.  It’s only 7 pages with two additional pages for agreements on confidentiality and volunteering.  Those last two pages are forms we ask ourselves and our new volunteers to look over and sign.

Of course, creating these policies and procedures represent another “first time” experience for the group.  We expect we left things out and may have gotten some other things wrong.  So, if you have any suggestions or questions, please feel free to comment here or to contact us.

I was grateful to be invited to give a reflection on my experience with the Guardian Group at the Worship Service of the San Jose Unitarian Church on May 22, 2016.

After the shootings Sunday morning at Pulse in Orlando, my gratitude in being able to help these refugees and asylum seekers is only greater.